Being discovered while still in art school and winning awards while making a living doing what you love. Any designer or artist could aspire to that sort of career path, but that’s exactly what happened to Paolo Rivera — painter, illustrator, sculptor, Eisner award-winner, and all-around talented comic book artist.

Read through his interview to learn how this illustrator got to be where he is now, why he does what he does, and his advice for aspiring designers. 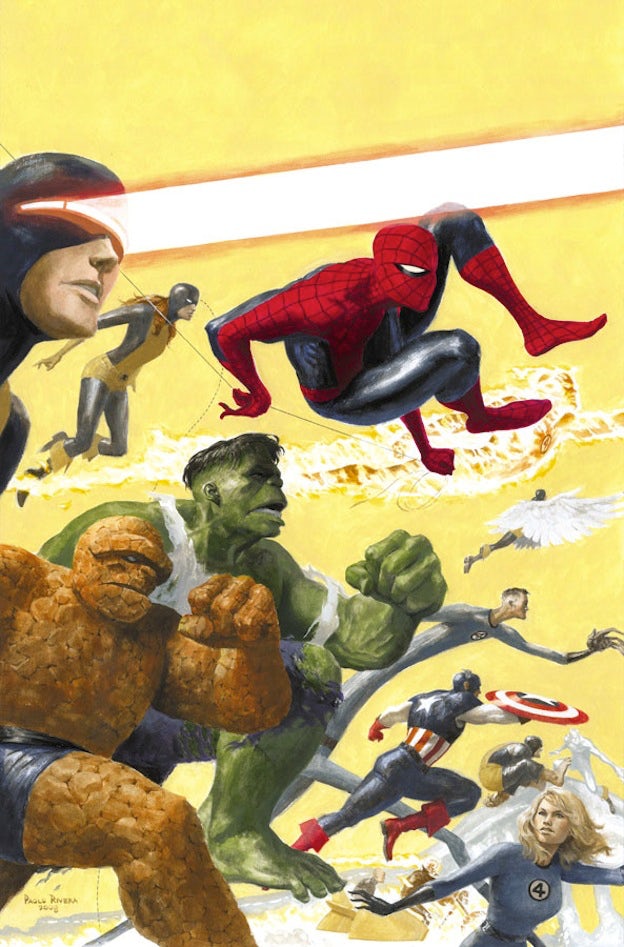 You first started working for Marvel right from college, and I think all of our designers want to know, how did that happen?

Back in high school, I met one of my favorite writers, Jim Krueger, at a comic convention in Orlando. I did some fan art for him during my freshmen year at RISD and he hired me to do additional artwork over the next couple years. That became my portfolio when he eventually introduced me to editors at Marvel, who hired me before my senior year. That was over a decade ago and I’m still doing work for them.

How do you choose which books you’re going to work on? Do you get to choose, or is it an assignment kind of thing?

I was very lucky from the beginning at Marvel. The books they chose for me happened to be the books I was dying to do. Ultimately, they make the decisions, but you can always say “no.” Fortunately, I never had to.

What’s the relationship like between the comic book writer and you, the painter/illustrator?

It depends on the writer. Most of the time, we receive a final draft that looks a lot like a movie script. If it were a movie, they would be the screenwriter and we’d be everything else — director, researcher, casting, etc. The last writer I worked with, Mark Waid, gave a lot of leeway in the interpretation. As long as I hit the major beats, I was free to explore and experiment with the storytelling.

What is the work you’ve done that you’re the most excited about?

It’s tough to narrow down, as I’ve been quite fortunate with projects and collaborators. Daredevil was a lot of fun, especially because it seemed like a turning point in my career. (I also got a lot of recognition for it, which never hurts.) Right now, I’m working on a poster for a Marvel movie that I’m pretty excited about. I totally nerd out when I get to see behind-the-scenes photos and concept art for films that aren’t out yet.

What made you want to start branching out from painting into penciling and inking, and even sculpture? Are there other mediums you would like to work in?

The switch to inks was one of necessity. In comics, the name of the game is speed, and painting just takes way too long. It’s justifiable for a cover, but I simply couldn’t keep up with interiors (I don’t know how some people do it). As for sculpture, it’s something I’ve always enjoyed. My first professional gig was a sculpted bust of Mystique from the X-Men. While I got the job through connections at Marvel, it was actually for a different company. I definitely have my favorite media, but I like jumping around because they force me to think in different ways.

I love how you show your process work on your blog. What was your motivation for doing that?

At first, the blog was just a way to keep my name out there. My painting projects took so much time that I was off the shelves for long stretches. The blog was a way to keep people engaged during those down times. Eventually, it grew into a side project that served the dual purposes of sharing information and shameless self-promotion.

What exactly does “the self-absorbing man” mean?

The Self-Absorbing Man is a play on the Absorbing Man, a classic Marvel villain (he already made his big-screen debut in the first Hulk movie, played by Nick Nolte, though they didn’t call him by name). When I was trying to come up with a decent title, I thought nothing could be more self-absorbed than a blog… and thus the name was born.

What outside of comics inspires your work?

I love all kinds of illustration and painting, but lately I’ve been getting more and more into graphic design. I actually don’t read much in the way of comics these days — I mostly listen to audiobooks and plug away through my Kindle account. I’ve spent my entire career in superheroes, but left to my own devices, I definitely gravitate toward science-related work. I just finished a biography of Nikola Tesla and am currently plodding through a textbook on nuclear fusion (in the hopes that I’ll find relevant information to use in my book).

I read from a previous interview that you’re working on your own project – that you’re illustrating and writing. Can you tell us a little more about it?

I’m in the writing stages of a 200-page graphic novel that I hope to start illustrating next year. It’s a sci-fi story set in the very far future that follows an engineer and the robots she created to survive, one of whom is a walking nuclear reactor. When the mining bots go missing, the group is forced on a quest for fuel at a distant nuclear missile silo. As you can probably guess, things do not go as planned, especially as the robots learn the true secret of their creation.

Do you have any quick advice for aspiring comic book illustrators out there?

Times are… interesting. For illustrators, both young and old, the industry seems to be in a state of constant flux. It’s never been easier to break in, and as a result, there’s never been so much competition. Thanks to the internet, your potential audience is the entire civilized world — the trick is getting their attention.

First things first, get good. The majority of people ask how to break in, when they should be asking how they can improve. If you’re good enough, work has a way of finding you. Specifically, If you want to be a comic book artist (especially for superhero publishers) I tell everyone to sculpt. There’s no faster way to learn how to draw.

Next up is networking. A website or blog is a must but if you want to draw comics, draw a comic. There’s no easier way to show what you’re made of. Go to conventions, set up in artist alley, get portfolio reviews, write to publishers and creators. Try everything and anything, because each and every artist will have a different big break.

I want to give a HUGE thanks to Paolo for answering my questions!

You can read more about the artist and find all of his work at his blog — The Self-Absorbing Man. Be sure to check out his articles on process work, as they’re the perfect resource for getting a better idea of how the illustration process goes in the comic book industry.

What is the most important thing you took from Rivera’s words? Let us know in the comments below!